"I can summarise how Ive always approached my role as Creative Director very simply: I treat every willing member of the creative department as a potential Creative-Director-in-waiting. Surprise surprise, the better theyre treated, the more responsibility I give them and the more rounded I try to make them  the better the work they produce for the agency."

As both ECD and Head of Copy I have led the creation, development and implementation of award-winning campaigns and copy for over 25 years both offline and online across a broad spectrum of clients.

My own individual copy has been recognised across a diverse range of craft awards. These include: the Ron Manager print ad for Holsten Pils [D&AD], The Beautiful Game comic strip poster for Sony PlayStations This Is Football [Campaign Posters Silver], theH2Slow Campaign for Isostar Sports Drinks [ISP Awards: Best Copy] and the Quaint Cornish Cottage (Outside Looe) Campaign for English Country Cottages [Travel Awards: Gold] and many more. I also have work in the Absolut Vodka Book.

My role as ECD/Head of Copy on clients such as Sony PlayStation, HSBC, Nissan, Mercedes-Benz and The Guardian has resulted in my teams winning many awards including Cannes, D&AD, Campaign Direct, Creative Circle, ISP, IPM, DMA, Precision Marketing, New York Festivals. Eurobest and the Webbies.

In my spare time, I am also a published author of children's books and have just penned a Sci-fi novel.

Following over 13 years of pure brand advertising at TBWA/London, I became a firm believer that ideas should be communicated via whatever media was appropriate  not just the obligatory mass comms channels that were typical of large ATL agencies. This made me receptive to the offer of becoming Creative Director of integrated agency Claydon Heeley, in 2001.

In 2007, I was offered the Executive Creative Directorship of RMG LONDON. The challenge laid down before me was to, quote: Do a Claydon Heeley. To revitalise the creative department. To build a comprehensive integrated team. To produce a consistently strong and diverse creative product. We soon had a terrific vibe under the inspired management of Tim Hipperson. Wave after wave of challenging creative work, new business wins, diverse awards and positive PR began to roll out. At this point, the dynamic changed, RMGs global network merged into JWT worldwide. Here was a new challenge. I eventually accepted the role of Group Creative Director and assumed responsibilities across some huge global integrated accounts. Always trying to navigate a creative path for our clients through recession-ravaged seas...

I co-managed the JWT creative department, looking after the integrated teams who continued to pick up awards across a wide range of disciplines. New business pitch wins I oversaw included Rolls Royce Corporate, Shell Global (repitch),Royal Caribbean and MyLawyer.co.uk

I believe in a creative department (and indeed an agency) that works closely, fluidly and honestly with its clients. I despise egos and believe a creative department should house a depth of general knowledge and expertise across the skillsets of writing, art direction and new technologies. Channelwise, teams should be competent across all disciplines. But, I expect them to think idea first then apply this core thinking to whatever touchpoints are appropriate.

2013-2014: Took sabbatical to write a book. 64,000 words later, tis done. Now, with the writing itch thoroughly scratched, its time to dive back into the ever-changing world of advertising/marketing/content creation. Im looking for my next front and centre challenge...

2007: Promoted to Executive Creative Director. Voted Campaigns third best Creative Director in 2006. Quote: Their boundary-smashing work divides awards juries because it often creeps over the border into ambient  it is always clever and beautifully executed. As well as the gimmicky stuff they get slated for, they have also proved they can produce stunning mailpacks. Their wide-ranging experience has moved Claydon Heeleys creative reputation by leaps and bounds.

Mercedes CL-Class Luxury Mailer - Writer, Johnny Watters, and I were actually briefed by Mercedes while sitting inside the car itself - now that's creative briefing (don't want to work on a parachute account though...) 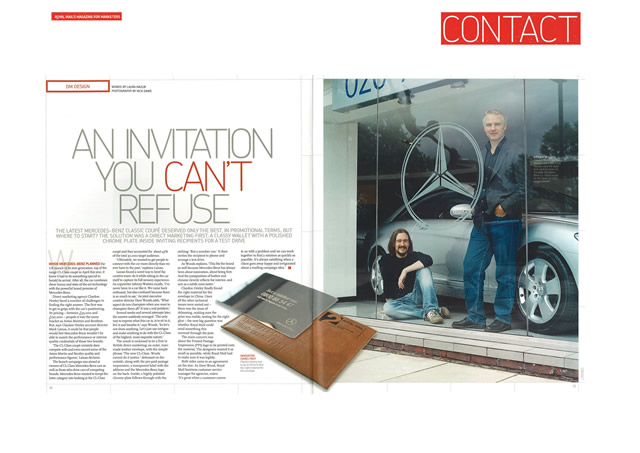 HOT OFF THE PRESS (and the Croisette...)

Some recent press - our PR queen, Hannah Mather is relentless ... 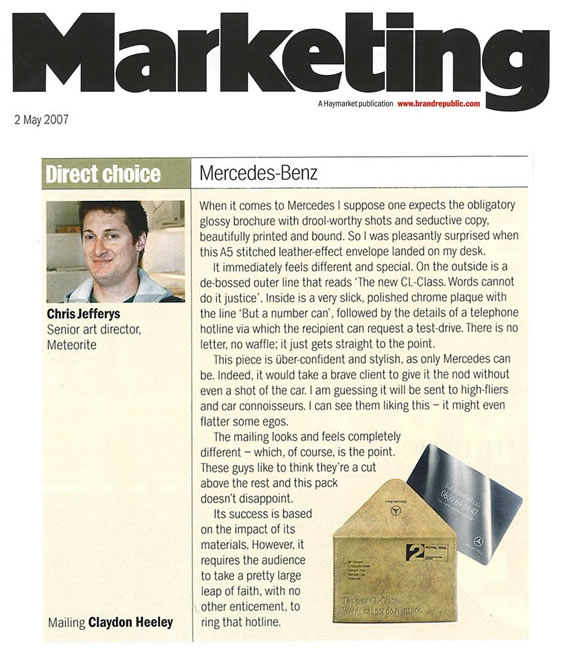 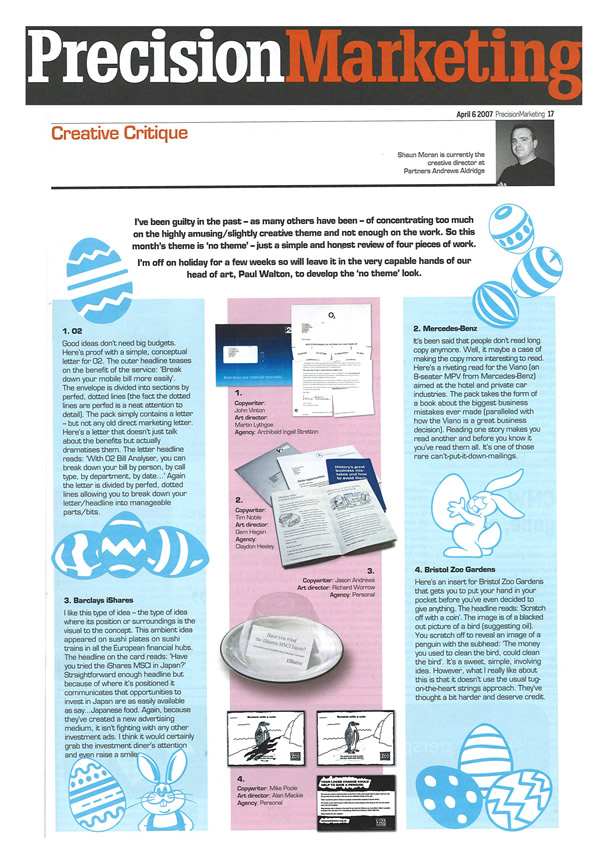